ESD’s Javier Ceja-Navarro (lead author) and Eoin Brodie, with researchers from the U.S. Department of Agriculture and Mexico’s El College de la Frontera Sur (ECOSUR), discovered that coffee berry borers rely on bacteria in their guts to detoxify the massive amounts of caffeine they consume when they eat caffeine-rich coffee beans, their sole source of food and shelter. Their caffeine consumption is equal to a 150-pound person downing 500 shots of espresso!

Caffeine in such concentration is harmful to most insects. The scientists discovered that these caffeine fiends, worldwide, share 14 bacterial species in their digestive tracks which degrade and detoxify the caffeine. The most common of these bacteria has a gene that helps break down the caffeine. Since this insect is a major pest to coffee growers, the researchers hope this insight will lead to new ways to fight it. 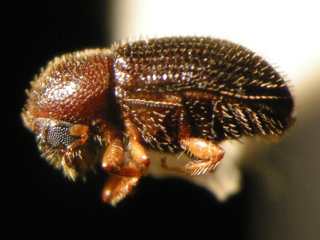